You Are Not Alone

Posted on January 20, 2019 by davidtkukulkan 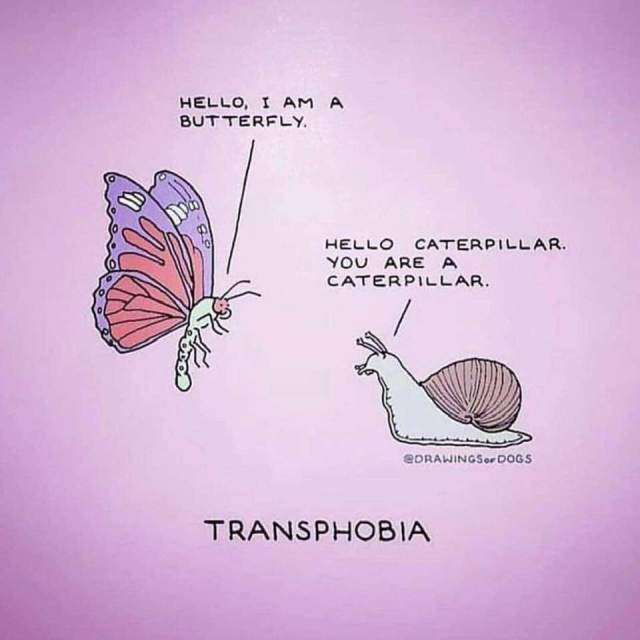 First, an update on the physical changes. Voice: a definite drop in it, cracks a lot which is annoying, but won’t be forever. Hair: Hair is everywhere, I found some on my toes!!!! Back, stomach, legs. Basically hair everywhere except my face. Six months on testosterone and changes are definitely noticeable in my overall body shape and face shape. I have a more “masculine shape” but with soft like features.

So, now that that’s out of the way, time to talk about what really grinds my gears: transphobia. It’s the only way I can logically explain what is going on in the news today. The current administration wants to go as far as take the word transgender out of the dictionary. Like, it will be forbidden to not only be it, but to speak it. So I shall be he who shall not be called that let’s call him she (Harry Potter much?).

What is transphobia? Well, exactly what it sounds like- not liking those that identify as transgender. More specifically from the World Wide Web the agreed upon definition of transphobia “… is a range of negative attitudes, feelings or actions toward transgender or transsexual people, or toward transsexuality. Transphobia can be emotional disgust, fear, violence, anger, or discomfort felt or expressed towards people who do not conform to society’s gender expectation. It is often expressed alongside homophobic views and hence is often considered an aspect of homophobia. Transphobia is a type of prejudice and discrimination similar to racism and sexism, and transgender people of color are often subjected to all three forms of discrimination at once.”

Child victims of transphobia experience harassment, school bullying, and violence in school, foster care, and social programs. Adult victims experience public ridicule, harassment including misgendering, taunts, threats of violence, robbery, and false arrest; many feel unsafe in public. A high percentage of transgender individuals report being victims of sexual violence. Some are refused healthcare, or suffer workplace discrimination including being fired for being transgender, or feel under siege by conservative political, or religious groups who oppose laws to protect them. There is even discrimination from some people within the movement for the rights of gender and sexual minorities.

Besides the increased risk of violence and other threats, the stress created by transphobia can cause negative emotional consequences which may lead to substance abuse, running away from home (in minors), and a higher rate of suicide. (Thank you, Wikipedia, for help on this.)

For more information on this see the link below:

It has been scientifically proven that transgender adolescents and children report living a happier, healthier life when support is given from family and friends. I’m not saying every one of my family members needs to be on board, or that my friends need to be 100%. But it sure does help. For my friends who know me best, coming out as a transman was not a surprise. Often I am asked a lot of questions about proper pronouns, what name I prefer, and surgery. The first two I have no problem answering, but as for surgery, well I’m not going to ask you about your parts so I expect the same.

I will never stop saying that a good support system is essential in whatever you decide to accomplish.

If you take a look at the suicide attempt rates, they are much higher among transgendered men (female-to-male). Can I say I haven’t had suicidal thoughts, or perhaps attempted in my life? No, I cannot. As taboo as it is to talk about, yes, I once preferred to be dead then to let my family down. I was raised that my family name meant everything and to always do the right thing, even if it meant I was miserable. Obviously I have finally shaken myself of that thought pattern, but it hurts when you see someone who lives a country apart from their family speak to them every day via web chat and text throughout the day about the most random of subjects. They also group web chat once a week with the ENTIRE family so that everyone can play with the 1-year-old nephew. My family is but a car ride away. Being trans is not why I am not close with them, again a whole other blog that I may or may not post. I may have shaken myself of the thought pattern, but the habit of making sure my family is not disappointed is still there.

At the end of the day anyone whether trans, or not, if you feel alone, YOU’RE NOT. There are numerous support groups and hotlines you can call. If you suspect someone is at risk, there are the SAME hotlines you can call for how to help them. Moral of the story: love is love, taking transgender out of the dictionary will not stop me from being who I am, and the more hate you put onto a certain group of people the more we become targets.

I am a cognizant collection and configuration of genes in symbiosis with various microorganisms, thoughts, memories, emotions all encoded in neurochemicals.
View all posts by davidtkukulkan →
This entry was posted in Anthropological, Depression & Anxiety and tagged false arrest, harassment, love is love, misgendering, suicide, support, threats, transgender, transgendered, transition, transphobia. Bookmark the permalink.