Posted on February 17, 2017 by davidtkukulkan 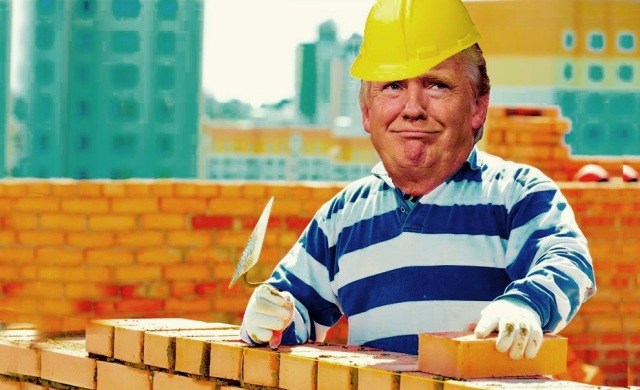 The proposal of building a nearly 2,000 mile border wall for the purposes of keeping illegal immigrants out of the country is, in short, infantile. At length, the proposal fails to understand not only the actual strategic function that walls provide, but history, economics, geography and logistics, therefore making it insulting to our intellect that we’d be expected to think this is even a real suggestion.

However, now that we are expected to take this idea seriously, it should be explained why we shouldn’t and instead reject it for the clownishly stupid idea it is. Perhaps most importantly is the simple fact it wont work. Now, despite being what most would consider “liberal” I have a dear fondness for walls as they do in fact keep me sheltered from the elements and provide a place for my things. They also serve to prevent strange people and animals from simply wandering in. However, they do not keep out animals, or people, that are actively attempting to enter: animals and insects get in, sometimes entirely by accident, and walls only slow down home invaders.

This leads us to the actual strategic purposes of walls. Walls can provide strategic cover which wont be needed on a border wall. Walls also provide defensive benefits be it for ancient towns, castles, or modern military fortifications. Some will insist that since castles and entire towns throughout much of history had walls and that we should too. However, unlike the walls in our homes, military fortifications are required to be manned in order to repel invading armies and they don’t always hold up. Fortifications like these were meant to force a costly siege, or to buy time: time to escape, or time for an allied force to arrive and dispel the enemy.

The subject of castles and ancient towns bring’s us to history which has brought us two notable large scale walls: the Great Wall of China and Hadrian’s Wall as the northernmost border of the Roman Empire in what is now modern Britain. Hadrian’s Wall was less than one hundred miles long and took fourteen years to build. The Great Wall is over ten thousand miles long and was constructed over a period of two thousand years. The purpose of both walls was to keep out raiding barbarian hordes. Both had limited success even with soldiers garrisoned and patrolling them: the barbarians still broke through, or just went around. They both ended up as expensive ruins that failed in their explicit purpose.

The construction of a border wall would also likely isolate small pieces of US land on the southern side of the wall because basic geography and logistics, like what happened to this golf course in Texas. Rivers, like the Rio Grande, don’t flow in linear patterns and thus our border with Mexico isn’t linear. There would be spots where logistics necessitate the wall be a certain distance from the river and would thus sequester some small areas of the US on Mexico’s side of the wall. Furthermore, construction along the Rio Grande would destroy crucial habitats for some endangered species while desecrating sacred native sites, but these haven’t stopped smaller fences from being erected and doing everything I just mentioned.

Finally, there’s economic cost. The construction alone cost more than twenty billion dollars, not including at least that much money every year after for maintenance. We will pay for every mismanaged cent through our taxes, not Mexico. And should we implement import tariffs we’ll be picking up the inflated cost on those imports as well.

The wall would cost us billions, upon billions of dollars and could be defeated by ropes and ladders and that’s if they don’t just take a plane and overstay their VISA.