Posted on August 1, 2013 by davidtkukulkan 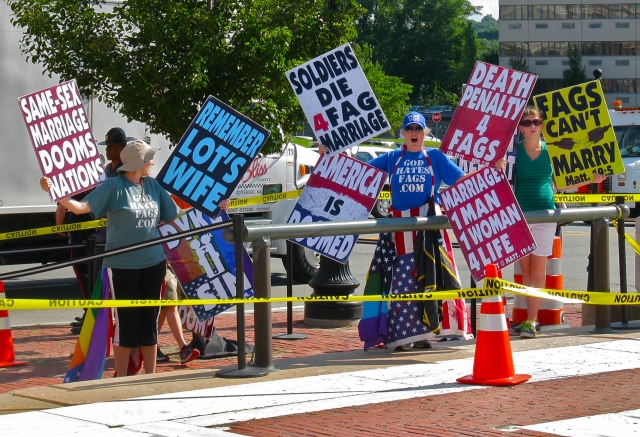 So today was the day. The Westboro Baptist Church- looks like 4 of them- came to visit Rhode Island. T’was somewhat of a surreal experience. You see their faces and signs online and on the news but seeing them in person was kind of like seeing a unicorn- if unicorns were evil, could talk, and used their speech to demean others.

The counter protest turnout was spectacular- students, Occupiers, LARPers, and drag queens all made it out with probably a few hundred people at each location- a least for the ones I could make it too.

The Church members sang, but you couldn’t really hear what they were singing, nor would anyone want to since it’s hateful and from what could be heard, they are not meant to be singers and wont be getting a record contract anytime soon.

As the cops directed traffic, most drivers honked their horns- presumably for the pro-equality side since many of the drivers made peace signs and gave a thumbs up towards the crowd, and not towards the four idiots on the street corner.  Yes, they had one little corner in each spot they went to, and were literally surrounded by counter protesters. 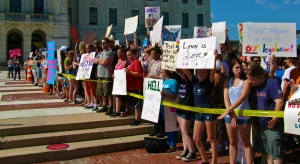 Every time the church members packed up to move to a new location the crowd cheered and hurried themselves to confront the WBC at their next location.

At one point “USA, USA, USA,” was being cheered as one of the crazies not only let her American flag touch the ground, but began walking on it as if to clean her shoes.

But, something odd struck me: were all these people out to support marriage equality or because they have a lot of hate and anger? I heard a lot name calling and vulgar insults towards the four idiots on the street corner. But let’s be honest, they had it coming. And who could blame masses for being angry since the only thing the WBC does is spout hate speech meant to do nothing but grab attention and piss people off. My guess is it was a combination of love and hate that brought people, not to mention curiosity. Personally I wanted to see them in person, and they really are as ridiculous as they’re portrayed in the media, but more pathetic. They didn’t even have enough people to hold all their signs.

Hopefully we sent them a message- which I think we did because they seemed to pack up early from each location- and hopefully they wont come back, but if they do, I’m sure there’ll be far more people against them that show up too.

I am a cognizant collection and configuration of genes in symbiosis with various microorganisms, thoughts, memories, emotions all encoded in neurochemicals.
View all posts by davidtkukulkan →
This entry was posted in Atheism & Religion and tagged counter protest, love is love, marriage equality, protest, providence, Rhode Island, WBC, Westboro Baptist Church. Bookmark the permalink.